Jordan Galczynski is a fourth-year Ph.D. student in the Department of Near Eastern Studies and Languages. She graduated undergrad from Temple University in Greek and Roman Classics and Archaeology, and received her Master’s from the University of Chicago in Egyptology in 2016. Her current research focuses on dress and textile studies in ancient Egypt, tracking patterns of elite competition and consumption, especially during times of crisis and collapse. 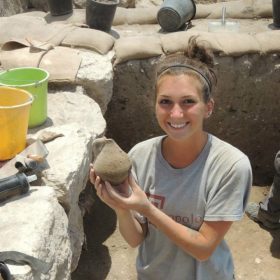