Kalani Michell is Assistant Professor of European Languages and Transcultural Studies at the University of California, Los Angeles. Her monograph, All in the Same Box: Unhinging Audiovisual Media in the 1960s and 1970s, will explore the transnational expansion of art and film outside of conventional exhibition contexts during this time period. She has published on a variety of film and media topics, such as on the web-based practices and installation art of Haegue Yang (in Reanimations), on Timm Ulrichs and the circulation of the Mona Lisa in the set design of pornographic productions (in CineAction) and on a computer game that restages waiting for a performance by Marina Abramović (in kultuRRevolution). Her most recent and forthcoming publications are about comics, sound studies and palms: the comics storyboard in Christian Petzold’s shot composition (in Storyboarding), academic podcasts that reposition the boundaries of film and media studies (in Format Matters) and the role of the palm tree in filmic, installation, architectural and infrastructural media environments (“Palm Tree Dreams”). 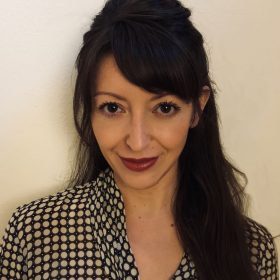