Tamara Levitz is a Professor of Comparative Literature and Musicology at UCLA, who specializes in literary and musical modernism. In 2012 she completed a major 654-page monograph, Modernist Mysteries: Persephone, in which she presented a micro historical analysis of the premiere by Ida Rubinstein of André Gide’s and Igor Stravinsky’s melodrama Persephone on 30 April 1934. That book received two prestigious awards: the Prose Award in Music and the Performing Arts, and the Otto Kinkeldey Award of the American Musicological Society, which represents the highest distinction for a senior scholar in the field of Musicology. She is currently completing a large project on “Decolonizing the American Musicological Society,” in which she examines how structures of white supremacy and practices of exclusion and inequality became instituted in the society and have shaped the profession of Musicology in North America to the present day. She is also in the initial stages of a book project on Imperialism and Modernism, in which she will examine modern literature and music from the perspective of global imperial politics. 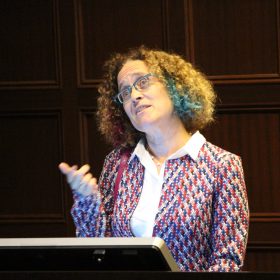