Skip to main content
Home » The Past, Present, and Future of UCLA’s TA Conference

The Past, Present, and Future of UCLA’s TA Conference 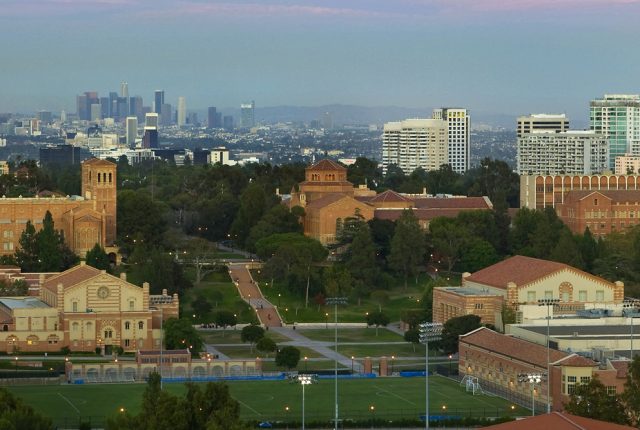 Jen: For two years I was a TAC [Teaching Assistant Consultant], first for the Writing Programs and then for the Department of English. For both of those years, all of the TACs on campus had to attend a central seminar run out of OID. So, when they put a call out for a new coordinator, I was already on their mailing list and they already knew me. My years of administrative work at a non-profit I think really helped bolster my application, but also my relationships with people who are doing things related to teaching. I had just finished the certificate in writing pedagogy, which allowed me to get to know a whole bunch of people from across campus who are also interested in and invested in pedagogy, so that really helped with my application. And so I started as the coordinator at the beginning of the summer.

EPIC: Is it a paid or volunteer position?

EPIC: So, talk about that. I had heard that last year’s extremely high attendance [this year’s conference reached similar numbers, with 436 attendees]  was a little unexpected, so can you tell me a little bit about why you think that was?

Jen: I think a big part of that was due to marketing. I think the need or interest has always been there or we can assume that has been there, at least recently. But last year, they did a lot more outreach to tell departments about it. I also think that across campus right now we are having this resurgence of interest in teaching pedagogy to our graduate students. In the sciences, for instance, Erin Sanders is running CEILS [the Center for Education Innovation and Learning in the Sciences] and she is really helping it take off, helping graduate students and faculty. It also has to do with Michelle Gaston, who was the first person to run the conference two years in a row. She streamlined everything so that future organizers could successfully market the conference. This year we used a MYUCLA alert as well as emailing departments and grad students and I think that helped as well.

Jen: This year because, like I said, we had such huge growth the year before, the Director of Instructional Improvement Programs, Kumiko Haas, wanted to expand the conference to two whole days in the fall. In the past we would hear people say, “I would love to attend but I have an orientation on Monday so I can’t come.” So we made it for two days, Monday and Tuesday, in the hopes that people who couldn’t attend one of the days might be able to attend the second. We still managed to pre-enroll sell out all the workshops. Most of the workshops are run like a seminar with twenty to thirty active learning participants in each. We try to model our pedagogy in the workshops to what we want to see from graduate students in their own classrooms. So they are interactive, they aren’t lectures, very few power points, and mostly activities and active learning. So this year each student had the opportunity to attend six different workshops over the course of the two days when in the past they would have three they could attend.

EPIC: What are some of the topics for the workshops?

Jen: The ones that we are most invested in are the core competencies: how students learn, the nuts and bolts of lesson planning, creating inclusive classrooms, assessment and grading, and departmentally specific active learning [for labs; STEM fields; and the arts, humanities, and social sciences]. The goal is to give the participants tool kits that they can then take away with them and implement in their first quarter teaching. Most of the people who attend are incoming TAs. They’ve never taught before or maybe have taught one class. Many are incoming graduate students who have not had any TA training yet and they may or may not have had any training from their own department, but they also might be about to head out to teach later that week. So, we are trying to stop that gap of knowledge where you are entering a brand new school, you don’t know where the buildings are, and you are trying to teach your first class.

EPIC: What is the vision moving forward for the TA Conference?

Jen: I think we want to reach more and more students. We also want to continue to improve our workshops and make them as universally useful as possible. Our goal is to serve the whole campus, all TAs and graduate students. Sometimes that means that the content is less important than the idea of how to teach; the goal is to get to a point where everyone is receiving those initial five core competency workshops.  We also want to make sure that they are being implemented in classrooms so we are starting to figure out how to do that with assessments. We are also offering individual workshops, led by TACs, throughout the year for each of the core competencies. They started doing these individual workshops two years ago, but they are really ramping it up this year.

The 2018 TA Winter Conference will be held on the consecutive Fridays of January 19 and January 26, which will provide an opportunity for TAs to learn more about teaching as they reflect on their fall quarters and anticipate winter and spring. Registration will begin soon.

For more information about the TA Conference, OID, and the TA Training Program, click HERE:

Vanessa Febo is a graduate student in the Department of English at UCLA. Her research focuses on the social construction of race in relation to late nineteenth-century Anglophone ballads. She is also the co-founder of the Social Justice Pedagogy Working Group, which seeks to create interdepartmental graduate student conversations through programming on issues related to social justice in the classroom. She currently serves as EPIC’s Graduate Student Researcher.

Jennifer is a graduate student in the English Department at UCLA, where she studies renderings of memory in contemporary global novels and teaches undergraduate courses on composition and literature. She received her M.A. in English with an emphasis on Women’s Studies from University of Pittsburgh. Jennifer has been a TA consultant in English and in Writing Programs. She is currently the TA Conference coordinator for Office of Instructional Development.